An overseas Filipino worker (OFW) returning home to the Philippines is in hot water after the Bureau of Customs (BOC) discovered a car and three motorcycles inside a container van only declared to contain household goods and personal effects.

Customs Deputy Commissioner Ariel Nepomuceno revealed that the shipment was consigned to a certain Efrell Lopez. It supposedly contained household goods and personal effects but an x-ray inspection of the cargo revealed the second hand vehicles.

According to Nepomuceno, what the shipper did was a case of ‘technical smuggling’, something that is against the law. Shippers are supposed to properly declare what’s inside their shipment; although many shippers don’t do it as they would have to pay higher taxes.

As in this case, the shipper paid a much lower tax whereas higher taxes would surely be paid for the importation of the car and the three motorcycles, even if these are already used or second hand items. 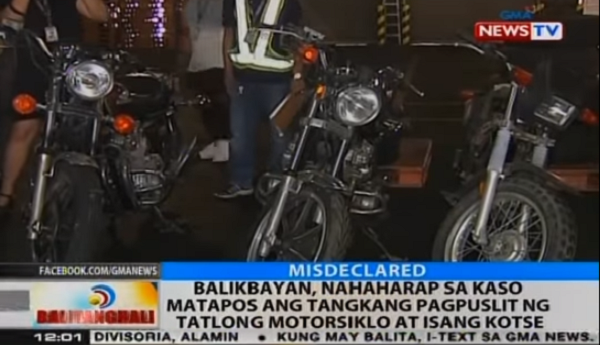 (We will implement the law; the problem there is that in this case, if the shipper is found guilty, he could face jail time of 3 to 6 years, aside from the penalties he has to pay.)

BOC’s X-Ray Inspection Project head Jaybee Cometa advised OFWs to properly declare their cargo and to know the laws concerning such shipments as ignorance of the law excuses no one.

He added that this incident should serve as a lesson to other OFWs that they can’t just import used vehicles without proper permits and documents.