Recruitment agencies are responsible for processing the necessary paperwork for overseas Filipino workers (OFWs), including paying for fees and various stuff required by the government. But it turned out there were several agencies who are making extra ‘income’ by making fake receipts to dupe OFWs.

Last August 12, 2015, Marveleca Bautista-Jauod was at the airport, heading back to her job in Kuwait for her second contract, when she learned that her 8-year-old son was diagnosed with dengue at their hometown in San Fernando, La Union province.

Torn between going back home and heading back to her job, Marveleca was assured by her mother, Vivencia Bautista, that they would take care of the child. At the time, she had nothing to worry about because she knew her son, Mar Israel, was covered by her PhilHealth for his confinement at Lorma Medical Center. 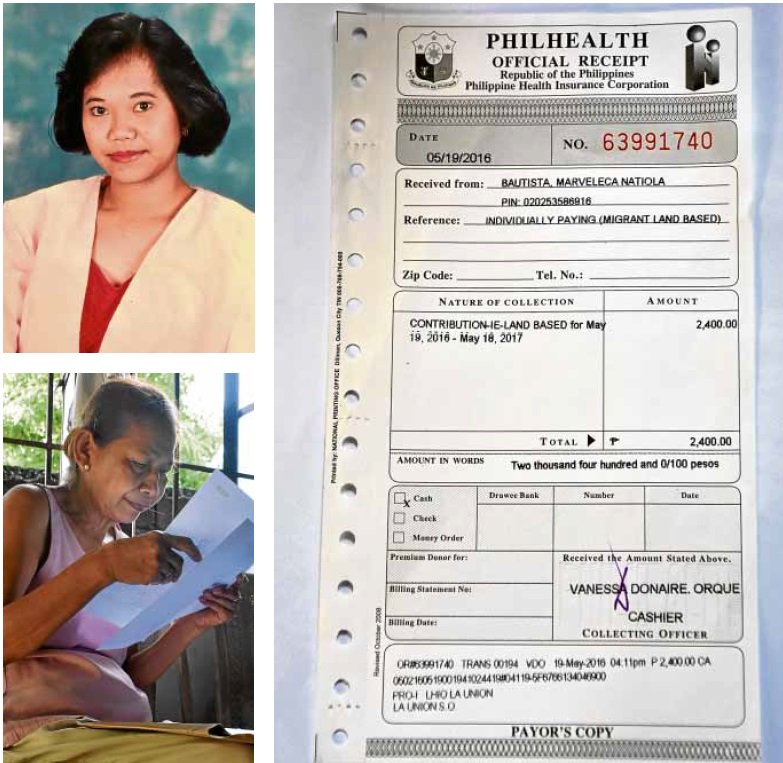 But the family would soon discover that Greenworld Placement Services did not remit the Php2,400 payment paid by Marveleca’s employer to PhilHealth. Instead, a fake receipt was issued to the OFW – and the number was later traced to someone else.

While PhilHealth covers dengue cases, providing from Php10,000 to Php16,000, depending on the case, Marveleca’s family had to shell out Php12,000 because her premiums were not paid. The bill was actually much higher, but the boy’s doctor waived his professional fees after learning about the agency’s actions.

A whistleblower from PhilHealth, “Eli” (not his real name), shared that the scheme was actually a common problem that the government is facing. Based on their data, there had been over 7,200 OFWs duped by their agencies using fake PhilHealth receipts. Many of these OFWs end up paying for the medical bills out of their own pockets.

But the number is believed to be significantly higher since the figure above only came from those who reported the problem with their PhilHealth membership to the government agency.

Marveleca’s mom would later pay for her PhilHealth premiums to ensure that other members of the family could avail of the benefits, when the time comes. But when Nanay Vivencia recently checked the account on PhilHealth, she was surprised to discover that the only premiums paid on Marveleca’s account were the payments she deposited for the 2016-2017 period…

Is it Important to Pay PhilHealth Premiums?

While PhilHealth payments are not required for all workers, it is highly recommended. While premiums might take a big chunk off the family’s budget, everyone in the family is entitled to the full benefits of PhilHealth (qualified dependents) – not just the member paying for the premiums.