December 8 is a day brimming with hope as the world’s first approved and fully-tested COVID-19 vaccine was administered to a patient.

And it was also a proud moment for the country, as the nurse who administered the vaccine to 90-year-old Margaret Keenan is May Parsons, a Filipina.

“I’m just glad that I’m able to play a part in this historic day,” the Filipina nurse said. “The last few months have been tough for all of us working in the NHS (National Health Service) but now it feels like there is light at the end of the tunnel,” she added. 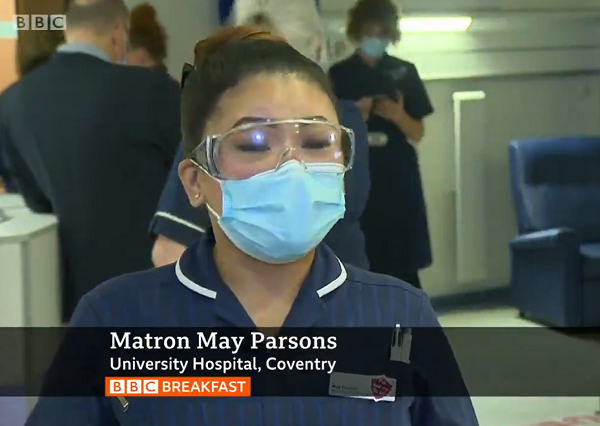 In a tweet, British Ambassador to the Philippines Daniel Pruce described the event as a fantastic moment and recognized Parson’s and Filipino healthcare workers’ contribution to the NHS.

“A fantastic moment! And great to see that the vaccine is administered by Nurse May Parsons from the Philippines—one of the many thousands of Filipino healthcare workers making such an enormous contribution to the NHS,” Pruce tweeted.

Meanwhile, UK State Minister Nigel Adams also shared on Twitter that his country was proud to have dedicated health workers like Parsons.

In an interview with BBC, Matron May Parsons described the importance of getting the vaccine.

“If anyone has the vaccine, they wouldn’t get it [COVID-19], they won’t pass it on, they will protect their family. They’ll protect their community. And for me, that is really important. It is important that we’re making this as popular as it can be, really, for everyone to take,” Parsons said.

Matron May Parsons administered the first Covid-19 vaccine outside of trial conditions in the world, to Margaret Keenan.
She tells #BBCBreakfast those who get the vaccine will protect their family. https://t.co/ptm70wnvMb pic.twitter.com/UClQSsQN0M

In other news, Filipinos working in care home facilities in the UK will be among the priority groups to get COVID-19 vaccines, along with care home residents and old persons who are considered to be ‘clinically extremely vulnerable’ to COVID-19.