“It’s an honor to be the first Filipina nominated,” Rodelia Pedro Villar said.

The Pinay OFW established the Domestic Workers Corner in 2017. The group provides psychological and material support for Filipino household helpers in Hong Kong, as well as assistance to those who were victims of romance scams, contractual disputes, and sexual harassment.

A native of Western Visayas, Rodelia has been living in Hong Kong for 17 years already. She said that she wants to help the members of the group to avoid getting into trouble and that she did not expect to be nominated for the award. 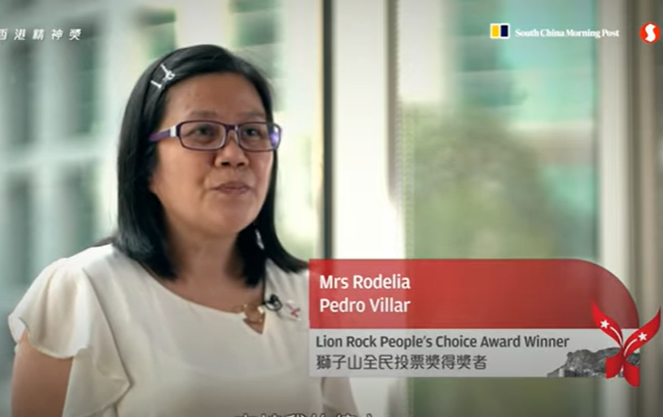 The Spirit of Hong Kong

“The Spirit of Hong Kong is not limited to nationality, I hold the same notion as all Hong Kong citizens, to help others,” Rodelia shared.

Held virtually last November 26, The Spirit of Hong Kong Awards is an annual award that started in 2013 and aimed to recognize the remarkable achievements of the country’s ordinary citizens.

The Lion Rock People’s Choice Award, on the other hand, is a recognition given to individuals who were able to fulfill philanthropic deeds in their respective communities.

Desmond So hosted the ceremony and described Rodelia as someone who represents a can-do and go-getter Hong Kong spirit which everyone admires and aspires to have.

Aside from Rodelia, there are five other individuals who were also recognized and awarded under different categories. The awardees were chosen by a panel except for the Lion Rock People’s Choice Awardee was chosen by the readers of the South China Morning Post through an online poll.