Home
News
Foreign Guy Breaks Up with Pinay GF Through Tiktok; Gets the Surprise of His Life

We reap what we sow. According to the Law of Karma, we get back whatever energy or thoughts we put out—whether it’s good or bad. Some people also associate this concept with Newton’s Law of Motion which states that ‘For every action, there is an equal but opposite reaction’. Simply put, we should be mindful of our acts and thoughts. Or else, we are in for a big surprise.

A man, who has a Filipina girlfriend, decided to end their two-year relationship through a video posted on the content-sharing platform, Tiktok. This particular video has been played more than 3 million times and garnered more than 200,000 heart reactions. The site, Expat Readers, featured this in an article.

In the said video, the foreigner told his girlfriend that he will no longer be sponsoring her fiancée’s visa. He also said that he no longer wants to be with the girl and added that he will not be coming down to the Philippines.

Furthermore, he said that he met somebody and that they have been together for a year. The man also stated that he thinks the Filipina is a nice person but he is sorry that their relationship has to end.

However, the Filipina did not even look sad nor cried. To the surprise of the viewers, especially of the man who posted the video, she already has a new man by her side.

The video also got a ton of comments from the netizens. One of them said that you can never break a Filipina’s heart. 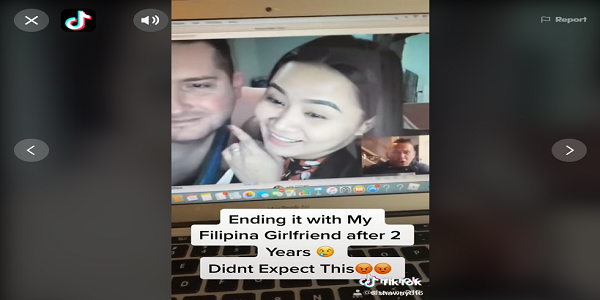 Another netizen asked, “Why is it okay for him to be with someone for a year? But when she shows a guy, it’s a problem?”

However, some netizens thought that the video was scripted.

How about you, what do you think?