Home
News
OFW Escapes from Employer, Asks for Help While Hiding Under the Leaves

A video of Elizabeth Ramos Cajes, an overseas Filipino worker (OFW) in Kuwait has recently made the rounds online. In the said video, a fellow Filipina OFW, Lorena, recorded Elizabeth’s plea for help, after she escapes her employer who has been, allegedly, mistreating her.

Talking to a certain Angeline, Elizabeth pleaded for help as she also said that her employer might kill her once she gets caught. She also asked her friend, Angeline, to tell her daughter that is alright. 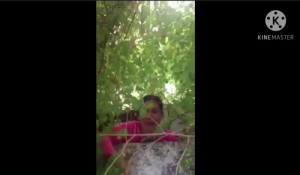 Lorena then told her that she will send Elizabeth’s video to her friend. Aside from that, she also told Elizabeth to stay where she is and she will come back in the afternoon to bring her water. She promised that she will help Elizabeth and told her not to worry.

Elizabeth was grateful that it was Lorena who found and helped her.

As soon as the video was uploaded, a lot of people expressed their desire to help the OFW.

Run for her life

In the television program, Wanted sa Radyo, Elizabeth told host Raffy Tulfo that two people were able to see her video, rescued her, and brought her to the Philippine Overseas Labor Office in Kuwait where she is now staying.

She also revealed that she walked a long distance after escaping from the house of her employer. When night time came, two police saw her and were about to apprehend her. Elizabeth pleaded with the policemen not to take her back to her employer. Fortunately, the police let her go and even gave her drinking water.

Her daughter, Jenny Ramos, also told Raffy Tulfo that her mother already worked for three different employers in Kuwait. The first two did not pay her salary. The third one did. However, it is this third employer who mistreated Elizabeth and took her mobile phones. Because of her sufferings under this employer, Elizabeth decided to run away.