Home
News
Some OFWs in Saudi still Unable to Go Home, Months after Their Contracts Ended

Overseas Filipino workers (OFWs) expect to get back home after their contracts end, with tickets to get them back to the Philippines paid for by their employers or agencies. But many OFWs are now stranded in Saudi Arabia even if their contracts have long ended because they were unable to obtain exit visas.

Over 100 of these stranded OFWs have been repatriated last week after they were given amnesty by Saudi Arabia but many remain trapped in the country, without work and allowance/salary for months but also unable to go back home.

One of these workers is Fernando Apat, a construction worker whose contract ended last December 2016. Despite stipulations in his contract with El Seif Engineering Contracting Company Ltd that he only has to work for 24 months and will receive plane tickets for home, only the first part was honored. He has not gotten his plane tickets home. 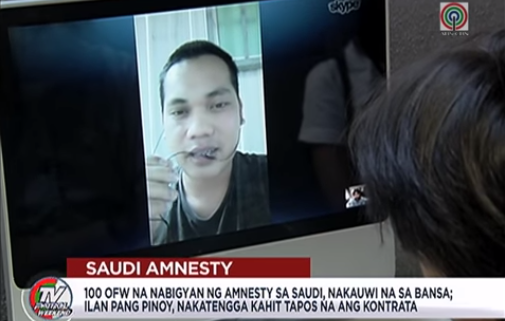 Screenshot from video by ABS-CBN News

With no work for several months now, Apat is concerned about his family back home. His wife, Joan Apat, has complained to the authorities about it but all they can do is wait and pray that he will be included in the next batch of stranded OFWs to be repatriated.

The Overseas Workers Welfare Administration (OWWA) estimates that Apat could be repatriated within 1 month. While that is still a long time, it is at least a good sign that he is now among the list of the ones to be considered for repatriation.

After waiting for 5 months, this 1 more month extension is a burden to the OFWs but the important thing is that they will be home soon.

OWWA administrator Hans Cacdac urges OFWs in the Saudi to register in the Saudi Amnesty Program before the June 29 deadline.