With the recent travel restriction on all flights from the United Kingdom to the Philippines, all Filipinos arriving from the said country will have to undergo a 14-day quarantine, as part of the government’s measures to prevent the spread of the new strain of the coronavirus in the country.

Under the new policy issued by the Inter-Agency Task Force, Filipino balikbayans from the United Kingdom who arrived at the Ninoy Aquino International Airport will have to undergo isolation at the quarantine facility in Pampanga.

They need to observe a 14-day quarantine period at the Athlete’s Village in New Clark City in Pampanga and secure a negative RT-PCR test result. 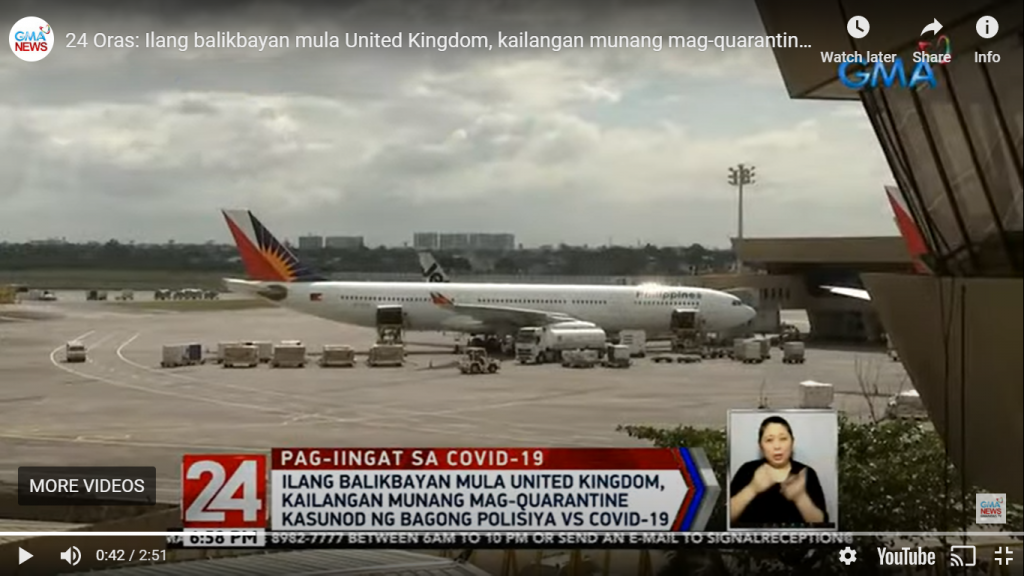 The government suspended all United Kingdom flights to the Philippines from December 24 to 31 following the recommendations of the Inter-Agency Task Force for the Management of Emerging Infectious Diseases (IATF-EID) “to curb the anticipated increase in COVID-19 cases during the holiday season”.

Presidential spokesperson Harry Roque said that all passengers who have been in the United Kingdom within 14 days immediately preceding arrival to the Philippines, including those merely in transit, are also temporarily restricted from entering the country for the same period.

“On the other hand, passengers already in transit from the United Kingdom and all those who have been to the United Kingdom within 14 days immediately preceding arrival to the Philippines, who arrive before 12:01 AM of December 24, 2020, shall not be subject to entry restriction but they would be required to undergo stricter quarantine and testing protocols,” he added.

There have been reports of a new strain of SARS-COV 2 monitored in the United Kingdom. This new strain could be up to 70 percent more infectious and much is unknown about it. Countries in Asia such as Japan and South Korea are monitoring the new strain while the Philippines’ Department of Health said that it has not yet monitored the new strain.