According to data from the Philippine Overseas Employment Administration (POEA), of the over 2.1 million Filipinos leaving the Philippines to work in other countries, around half are bound for the Middle East.

Sadly, many of them face maltreatment and various forms of abuses. Worse, many have taken their own lives because they could no longer take the abuse they have to face every day while others have been killed by their abusers.

In a bid to keep Filipinos safe, without having to totally ban sending them to the Middle East, the Department of Labor and Employment (DOLE) is looking into the possibly of imposing a limit, instead.

As of press time, DOLE is yet to announce the details regarding the limits that will be imposed for overseas Filipino workers (OFWs) bound for the Middle East but the move is welcomed by many sectors, especially those who have been calling for a ban in sending workers there because of the numerous abuse cases reported. 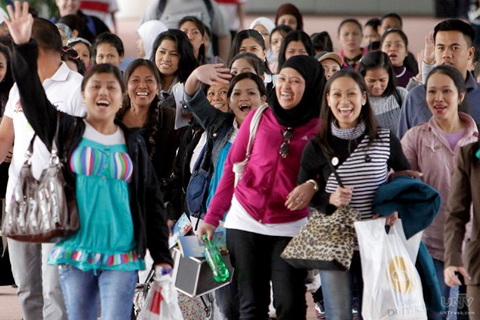 Others are still pushing for a total ban; although that would surely be impossible, considering that the Philippines could not provide livelihood and jobs for the OFWs who will be affected by the ban.

The DOLE believes that limiting the deployment of OFWs to the Middle East will still benefit the Philippines, especially because there appears to be a shortage of workers in certain sectors (such as in construction) because workers prefer to go abroad than stay and work in the country.

For instance, according to data from DOLE, the country needs around 170,000 construction workers because of the government’s numerous projects but only 80,000 slots have been filled because many have gone abroad, instead.

What do you think of DOLE’s plan to limit the number of OFWs in the Middle East?