Home
News
Woman Stayed at the Airport for a Week Waiting for Her ‘Boyfriend’; Fell for ‘Love Scam’

A 67-year old woman from Pangasinan, who has been staying at the airport for more than a week waiting for her foreign boyfriend, has apparently fallen victim to a ‘love scam’.

According to alias “Remy”, she has a lot of chatmates but this particular man was different from the rest, as he was kind and respectful.

She went to the Ninoy Aquino International Airport to meet her future husband for the first time. 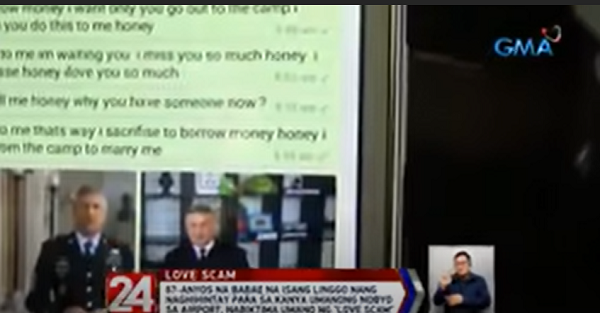 To be able to give what her ‘boyfriend’ needs, alias ‘Remy’ took out loans and borrowed money. For the second time, the ‘boyfriend’ asked for money again. This time, he needed P70,000 to pay immigration personnel to release him.

Unfortunately, she could not communicate anymore to her alleged ‘boyfriend’ and even to the three unidentified women.

Authorities said that alias Remy has become a victim of a love scam.

Airport Police Senior Inspector Nemencio Bawalan said that these scammers will claim that they are being held at the immigration and they need to pay the personnel, in exchange for their freedom.

Despite everything, alias Remy does not believe that she became a victim of a love scam.

Tweet Pin It
Tags:Alex Shandler, foreign boyfriend held at the immigration, love scam, Ninoy Aquino International Airport, woman waited for her 'boyfriend' at the airport for a week